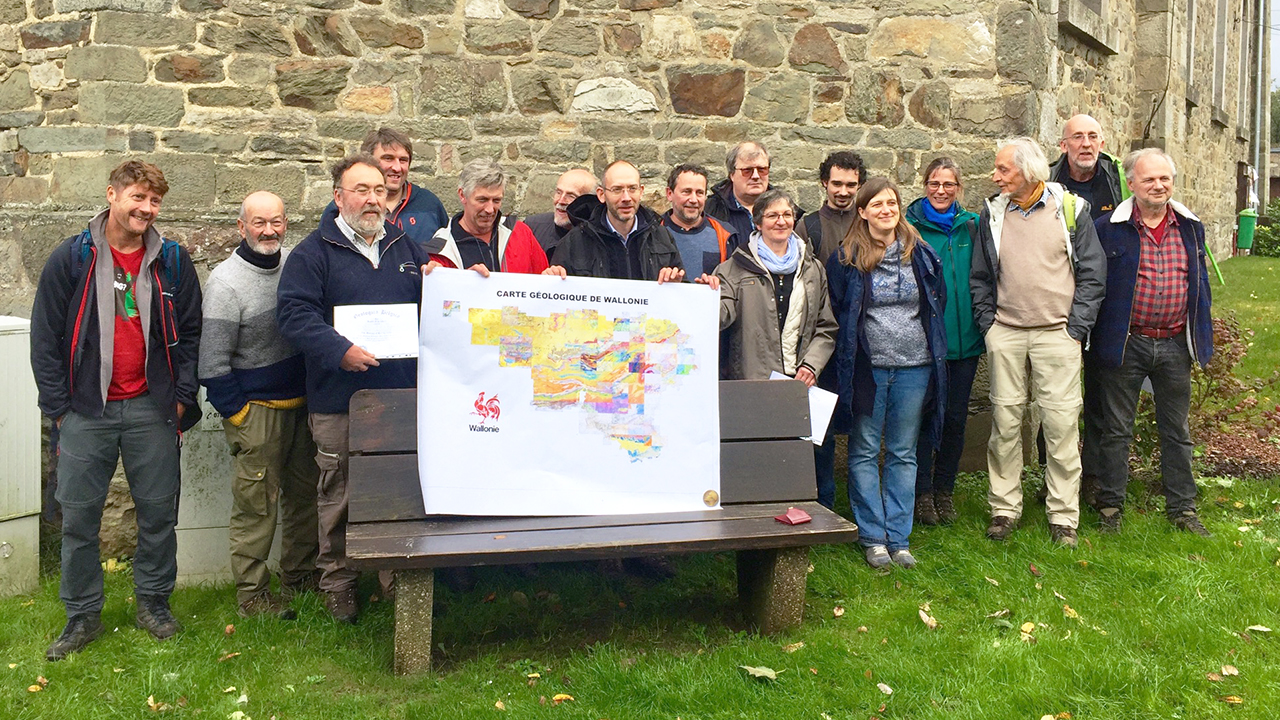 The Van den Broeck Medal, awarded to scientists whose work has had a significant impact on geological sciences, was awarded this year to all geologists who have worked for 30 years on mapping the subsoil of Wallonia. Among them, Jean-Marc Marion, Frédéric Boulvain, Laurent Barchy, Bernard Mottequin and Pauline Lamberty, geologists from the University of Liège (Eddy Lab / Faculty of Sciences).

he scientific association of geologists of Belgium, called Geologica Belgica, has decided to honour geologist cartographers who have worked within the framework of the programme to revise the geological map of Wallonia. It is at the end of 2019 that the field work phase ends, after more than 30 years of work, prospecting and research! This is exactly one century after the completion of the work that, from 1890 to 1919, had led to the publication of the first geological map of Belgium.

The Van den Broeck Medal is awarded annually to one or more scientists whose work has had a significant impact on the geological sciences in Belgium. This year, this medal was awarded to all the geologists who have mapped the rich subsoil of Wallonia for nearly 30 years. Among them, 5 members of the University of Liège who, at different times, have been strongly involved in this vast project by producing numerous maps of the Walloon subsoil. Jean-Marc Marion (involved since 1990) teamed up with Frédéric Boulvain (1990-1992), then a geologist at ULB and then became a professor at ULiège, then with Laurent Barchy (involved from 1995 to 2008), Bernard Mottequin (from 2008 to 2014), and Pauline Lamberty (from 2014 to 2017). These are the 5 winners from the Department of Geology in the Faculty of Science.

In this way, Geologica Belgica wishes to honour geologist cartographers for this work of the utmost importance, which already serves as a fundamental basis for understanding and managing water resources, geothermal energy and natural hazards. This work is also of crucial importance for the economic management of the subsoil, revealing areas of interest or not for the extractive industry.

This medal will be awarded to the geologists of the Geological Map of Wallonia on 4 October 2019 during a field day in the Stavelot Massif; the programme and information are available following this link

About the EDDy Lab

The Evolution & Diversity Dynamics Lab brings together geologists, biologists and paleontologists to analyze past biodiversity fluctuations. The diversity of profiles in the laboratory makes it possible to combine field work, 2D and 3D morphological studies and advanced quantitative analyses to understand how the major upheavals of the past have affected ecosystems, particularly during mass extinctions.