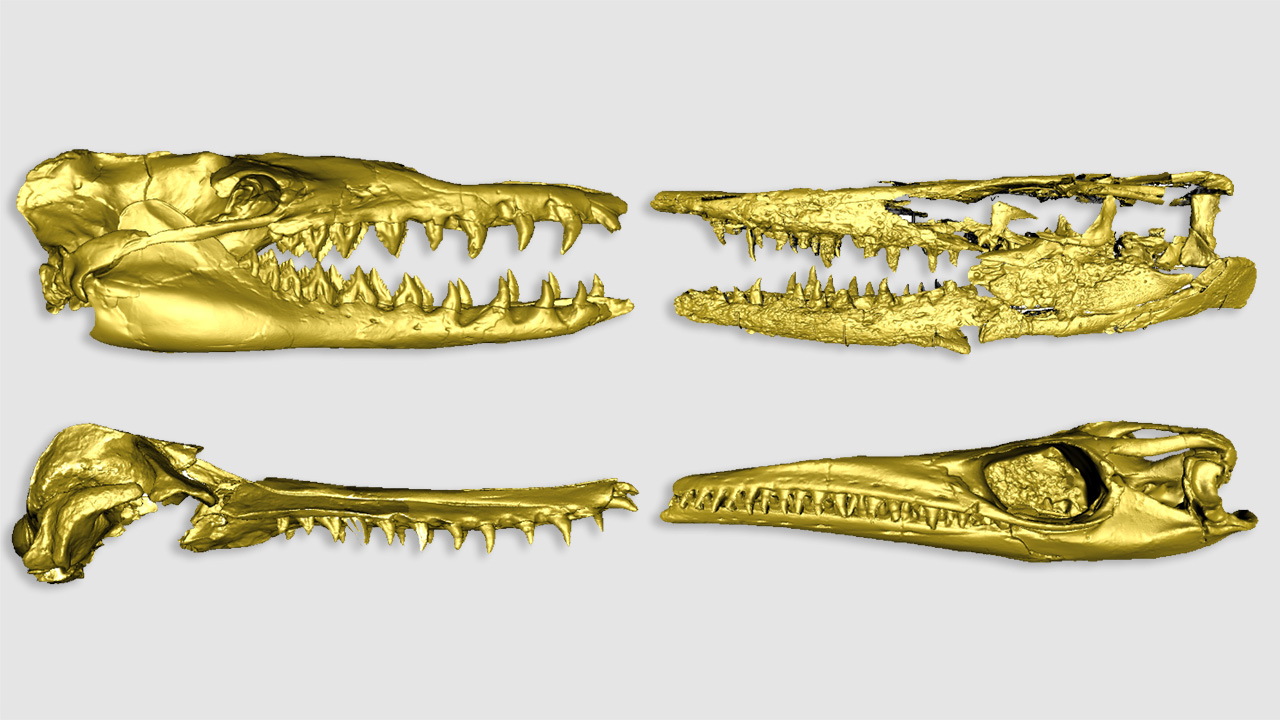 Did the first ancestors of whales pick up where the mosasaurs left off 66 million years ago, after the extinction of all the large predatory marine reptiles? A study conducted by Rebecca Bennion, a PhD student at the EDDyLab (Geology Research Unit / Faculty of Science) at the University of Liège, has looked into the possible convergences in morphology and behaviour that may exist between these two groups of large marine predatory animals. This research has been published in the journal Paleobiology.

any of us are familiar with modern whales and dolphins. However, the extinct ancestors of these modern marine mammals bear an uncanny resemblance to earlier forms of marine life, notably the mosasaurs, a completely extinct group closely related to snakes and lizards. "Superficial similarities have long been noted, but the idea that these two groups might be functionally similar has never been rigorously tested," explains Rebecca Bennion, a doctoral student at ULiège's EDDyLab and first author of the study.

The research, which has just been published in the journal Paleobiology and was carried out by an international team of scientists based in Europe, the USA and New Zealand, investigated the potential for convergent evolution of skull morphology between ancestral cetaceans and mosasaurs. To do this, a range of functional and biomechanical features were recorded from high-resolution three-dimensional (3D) scans of skulls from both groups. "Our laboratory has assembled a vast library of 3D scans of fossils, allowing us to explore in detail questions on large-scale evolution," explains Prof. Valentin Fischer, palaeontologist and director of the EDDy Lab at ULiège.

While cetaceans and mosasaurs initially had quite different ecological characteristics, this study found that several species had nevertheless acquired quite similar morphology and thus showed evolutionary convergence. "This convergence between early cetaceans and mosasaurs tells us more about the physical characteristics necessary for large marine predators to evolve optimally," says EDDyLab researcher Dr Jamie MacLaren, "Many members of these groups become very similar in their ecological characteristics, suggesting similar selective pressures on these animals despite being separated by tens of millions of years. Nevertheless, important differences remain between the two groups despite these examples of convergence. "Our results show what is called 'incomplete convergence', with differences remaining due to the mammalian or reptilian origin of each group," continues Rebecca Bennion.

Modern cetaceans are indeed a group that remains scientifically very interesting to study, it remains to be seen how diverse their morphology and ecology is compared to other fossil marine animals. This research is just the tip of the iceberg; further research into the convergence of marine animals through the fossil record will help us understand the constraints that evolution places on aquatic organisms and how they overcome them.