Herbivorous pacus vs. carnivorous piranhas: who has the strongest bite? 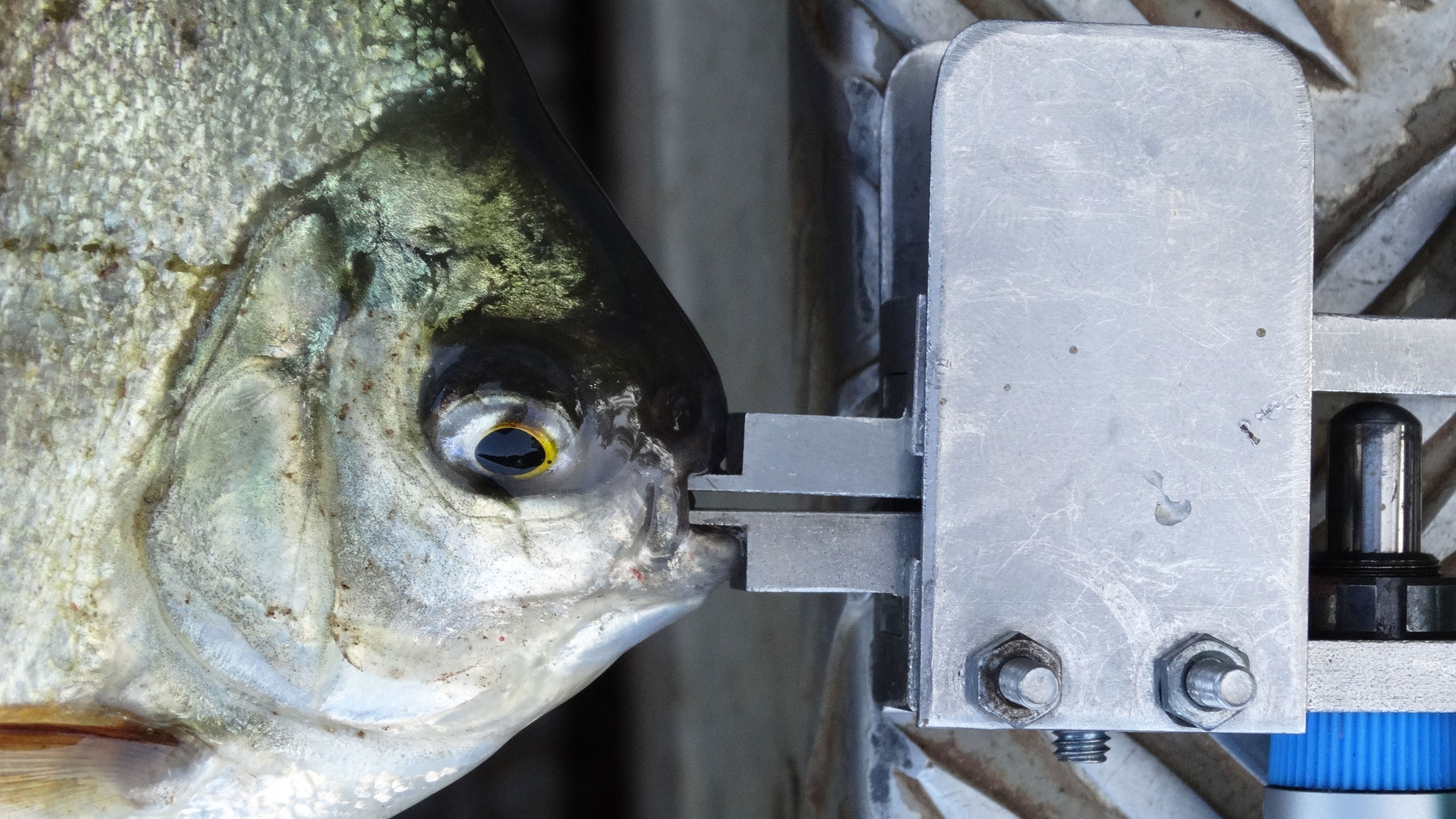 Alessia Huby, PhD student and FNRS aspirant at the Laboratory of Functional and Evolutionary Morphology, focused on the bite force of Serrasalmidae, a family of toothed fish that includes pacus and piranhas. This recent study published in the Biological Journal of the Linnean Society (1) shows that their bite capacity is directly related to the evolution of their jaw system, itself related to the evolution of their diet.

errasalmidae (known in particular with pacus and piranhas) are atypical fish among their freshwater congeners found in South America. Their feeding mode is exclusively based on biting to feed on different types of animal and/or plant prey (fishes, other vertebrates, fins, scales, crustaceans, molluscs, insects, plants, flowers, fruits, seeds, algae) when most fish from other families feed by suction feeding. Serrasalmid fishes are all thought to be initially herbivorous with some specialized species such as pacus capable of crushing hard seeds/nuts. Some other species then turned toward carnivory such as piranhas, known for their ability to cut pieces of flesh.

Before the study conducted by researchers from the Laboratory of Functional and Evolutionary Morphology (Faculty of Sciences / FOCUS Research Unit ), it was well known that the black piranha Serrasalmus rhombeus held the record for relative bite force among all extant vertebrates. The biting capacities of herbivorous serrasalmid fish (e. g. pacus) had never been measured and compared to those of carnivorous piranhas. "We have thus hypothesized that herbivorous species that feed on hard seeds and/or nuts should have higher bite forces, larger jaw muscles and more robust jaws than carnivorous species that feed on soft prey," explains Alessia Huby, PhD student in the laboratory and first author of the article published in Biological Journal of the Linnean Society.

"To test our hypothesis," says Eric Parmentier, lab director, "we recorded bite forces both empirically (in-vivo with a force sensor placed between the jaws of the fish that bites voluntarily) and theoretically (from dissections of the jaw muscle) in different species of serrasalmid fishes. We also evaluated and compared different morphological and functional properties of the jaw system in these same species, such as the size of the jaw  muscle, the jaw shape, the type of jaw occlusion, etc. ». In addition to the fundamental aspect of the research, the underlying idea is to determine whether the bite strategy of these fishes, and therefore their cutting method, can inspire diverse mechanical applications.

The results of this new research show that, contrary to the initial hypotheses, carnivorous piranhas bite relatively stronger than herbivorous pacus, mainly because of the larger size of the jaw muscle and their jaw shape, which becoming more elongated, offers them a better lever system. Carnivorous piranhas still therefore hold their champion status in terms of bite force, keeping all body size proportions. In addition, a nice parallelism can be made with mammals. In carnivorous piranhas, the jaws function like scissors and therefore favour cutting because not all teeth penetrate the prey simultaneously. This is also the case for carnivorous mammals (wolves, sea lions, felines, etc.). On the other hand, in herbivorous species (pacus), the jaws are organized to function as a vise. The occlusion of teeth is simultaneous, which favours crushing. This is also the case for herbivorous mammals such as cows and horses.

The results obtained by researchers from ULiège, MNHN, UGent, HYDRECO Guyana and UFMG are also used in an evolutionary biology context to understand the history of the group and mainly how it was possible for them to shift from a herbivorous diet to a carnivorous diet. "We have shown that in addition to their different dentition (sharp teeth in piranhas vs. incisiform to molariform teeth in pacus)," explains Alessia Huby, "the diet change in this fish group can be explained by a change in the jaw muscle size and jaw shape. "One of the species (Pygopristis denticulata) is, however, also interesting because it has features from each guild and suggests the pivot between both diets. Curiously, the diet change corresponds to another important change: it is by becoming carnivorous that Serrasalmidae have developed their ability to produce sounds. Some work remains to be done to make the link between these two types of behaviour.

Herbivorous pacus vs. carnivorous piranhas: who has the strongest bite? Research conducted at the Functional and Evolutionary Morphology Laboratory shows that the biting abilities of these fish from the same family are related to the evolution of their diet and oral morphology.

Functional diversity in biters: the evolutionary morphology of the oral jaw system in pacus, piranhas and relatives (Teleostei: Serrasalmidae)