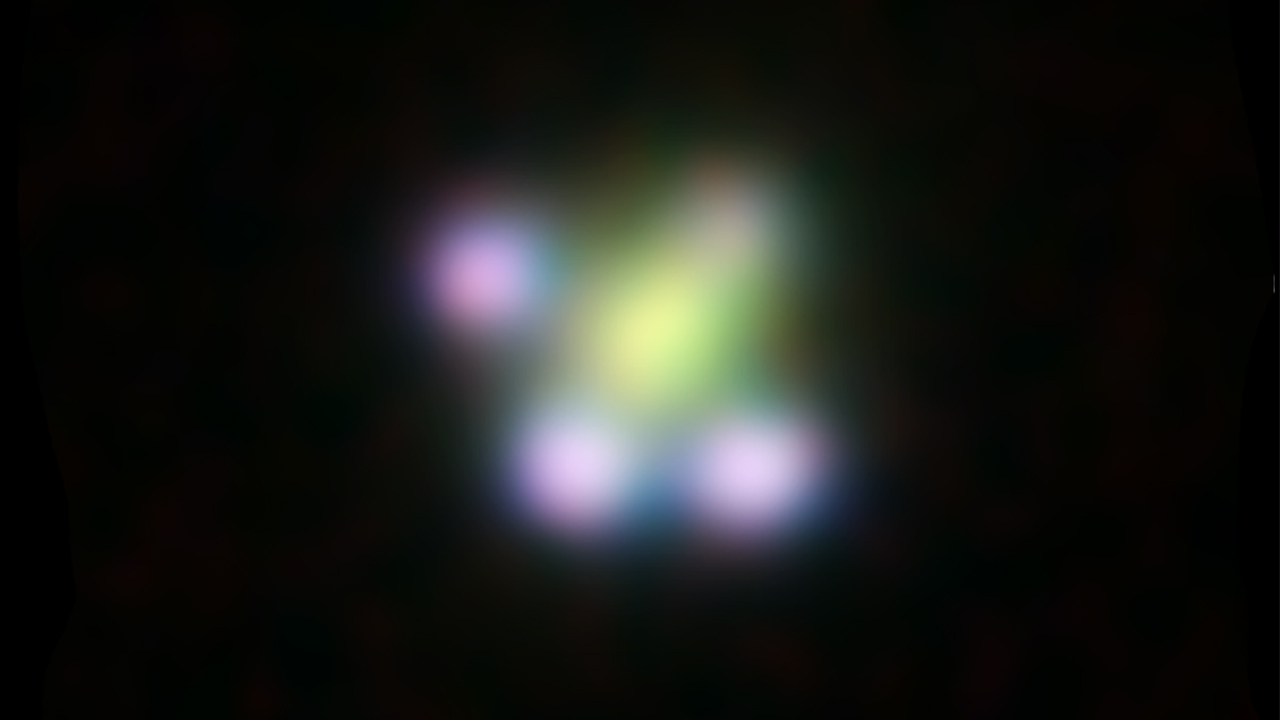 Using artificial intelligence techniques, an international team of researchers, including astronomers from ULiège, has discovered a dozen new quasars whose light is so strongly deflected by foreground galaxies that they are visible as four distinct images, resembling cosmic four-leaf clovers. These celestial gems are unique tools for learning more about dark matter and the expansion rate of the Universe.

The idea that gravity can cause massive objects like galaxies to bend the fabric of space-time, and thus act as a lens and deflect light from distant objects, was predicted by Einstein as far back as 1912. But the first double image of a lensed quasar was not discovered until 1979, and the first quadruple image in 1985. Four-leaf cosmic clovers are rare, and since 1985 only about 60 have been discovered.

Multi-image quasars are unique tools for measuring fundamental cosmological parameters such as the Hubble-Lemaître constant, i.e. the current expansion rate of the Universe (the value of which is still disputed), or dark matter in the Universe.

By being able to study the sky with unprecedented spatial resolution, the European Gaia telescope is changing the game in the complex detection of new cosmic clovers. The 12 clovers discovered increase the number of confirmed clovers by 20%.

The active role of the ULiège astronomers

The interest of ULiège astronomers in these gravitational mirages dates back to the early 1980s when, at the time, many scientists still doubted the existence of these phenomena predicted in Einstein's general relativity.

In 1987, Professor Jean Surdej proposed that these mirages would be easily identifiable among the brightest stars in the Universe, quasars located about 10 billion light years away. Several examples of mirages were then discovered. He then proposed in 2002 to search for these cosmic mirages among the one billion stars that would be detected by the European space observatory Gaia.

The new Einstein quasars discovered are proof of the relevance of this proposal. The ULiège astronomers have been very actively involved in the search for these mirages, in their modelling and in the reduction and analysis of spectra obtained with large ground-based telescopes. 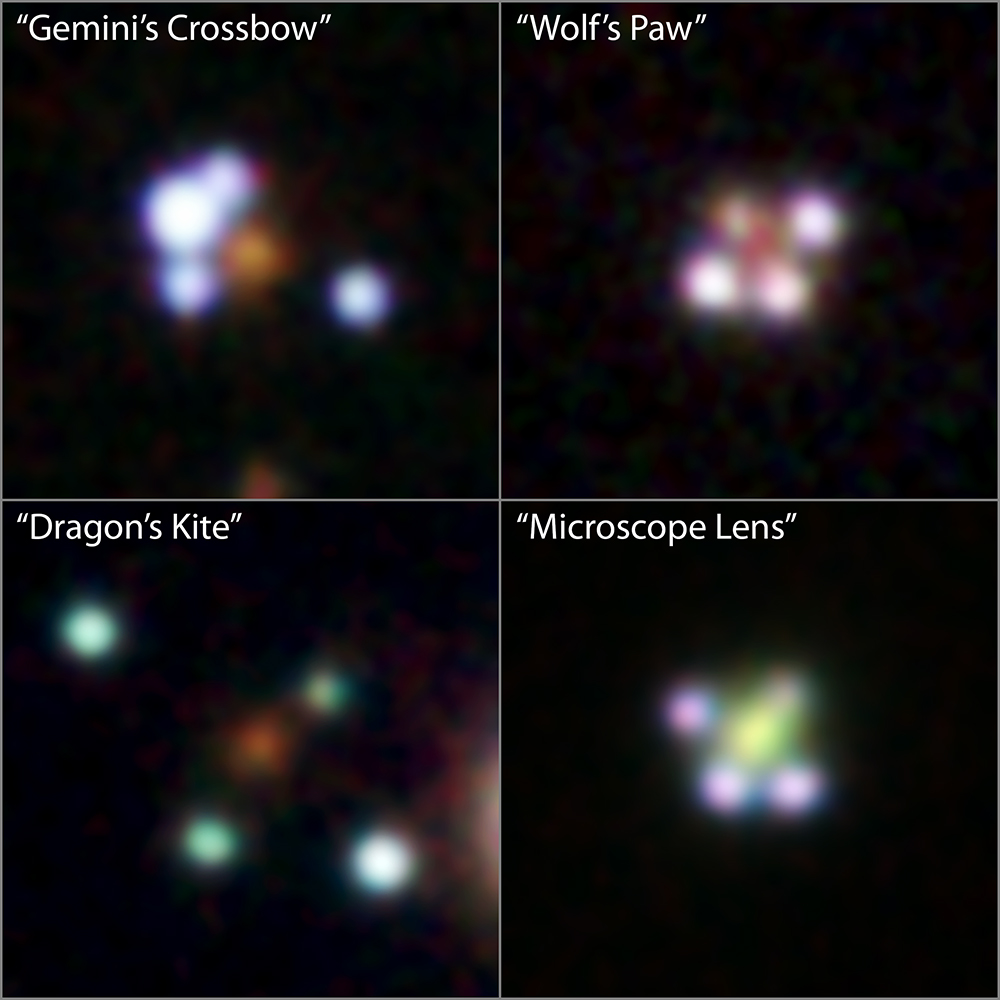 Four of the new quasars imaged from the ground. The blur in the middle of the images is the 'lensing' galaxy, whose gravity splits the light from the quasar behind it to produce four images of the quasar. By modelling these systems and monitoring how the brightness of the different images changes over time, astronomers can determine the expansion rate of the universe and help solve cosmological problems. Image credit: The GraL Collaboration 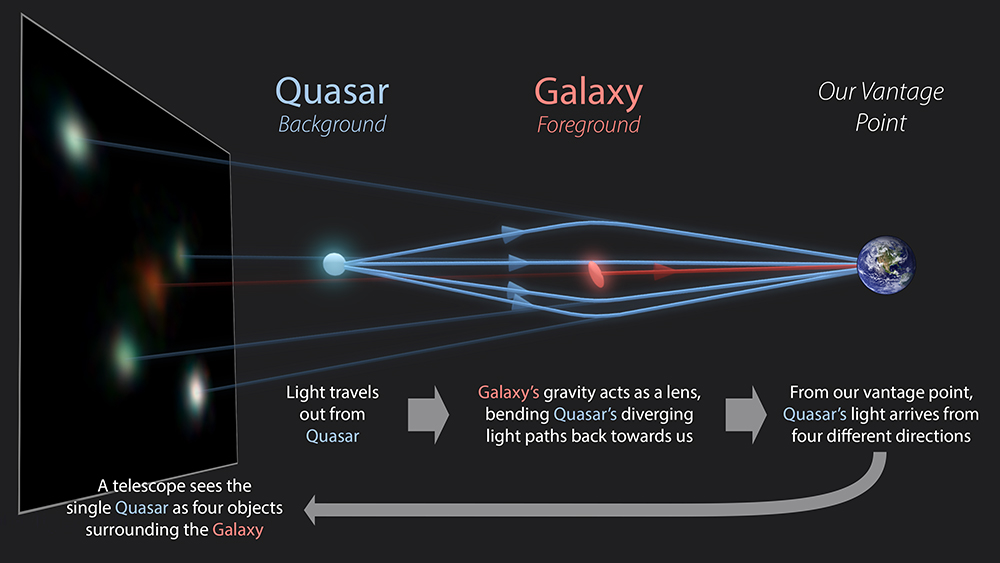 This diagram shows how quadruple-image quasars, or quads for short, are produced on the sky. The light from a distant quasar, billions of light years away, is bent by the gravity of a massive galaxy in front of it, as seen from our perspective on Earth. The bending of the light gives the illusion that the quasar has split into four similar objects surrounding the foreground galaxy, looking like a four-leaf clover. Image credit: R. Hurt (IPAC/Caltech)/GraL Collaboration

Ludovic Delchambre, researcher at the High Energy Astrophysics Group of the STAR Research Unit, Department of Astrophysics, Geophysics and Oceanography, University of Liege 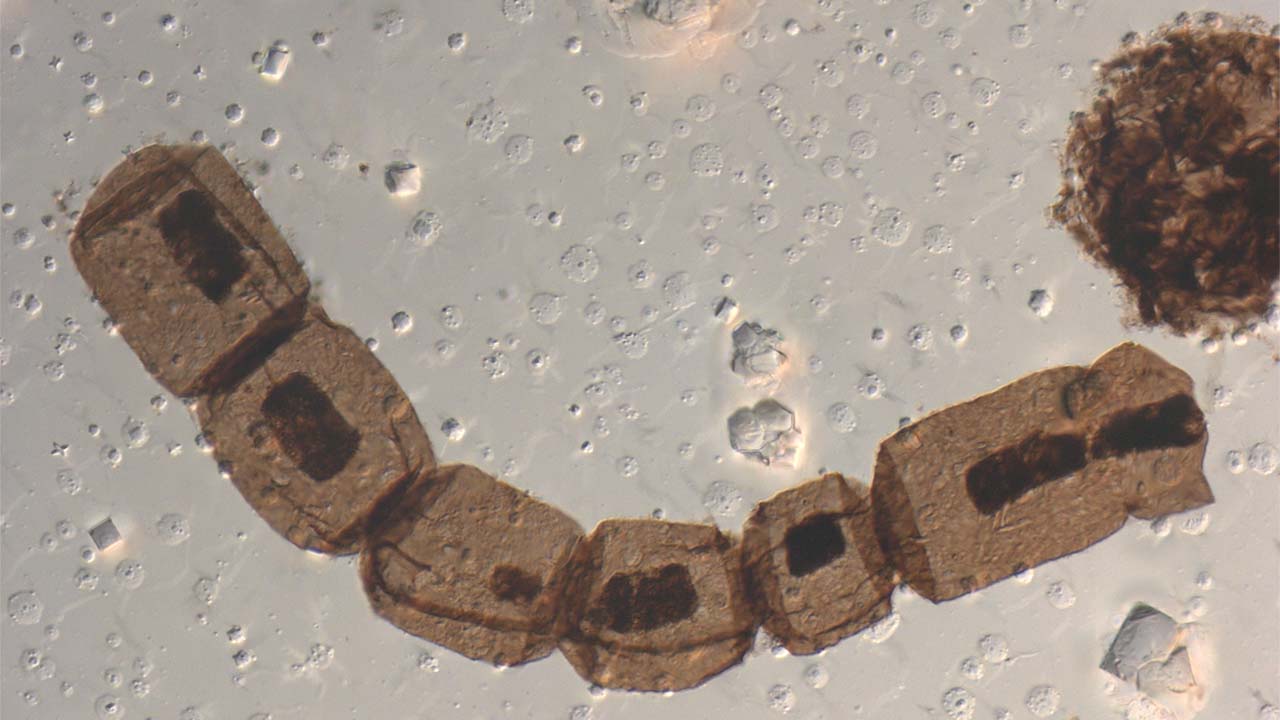 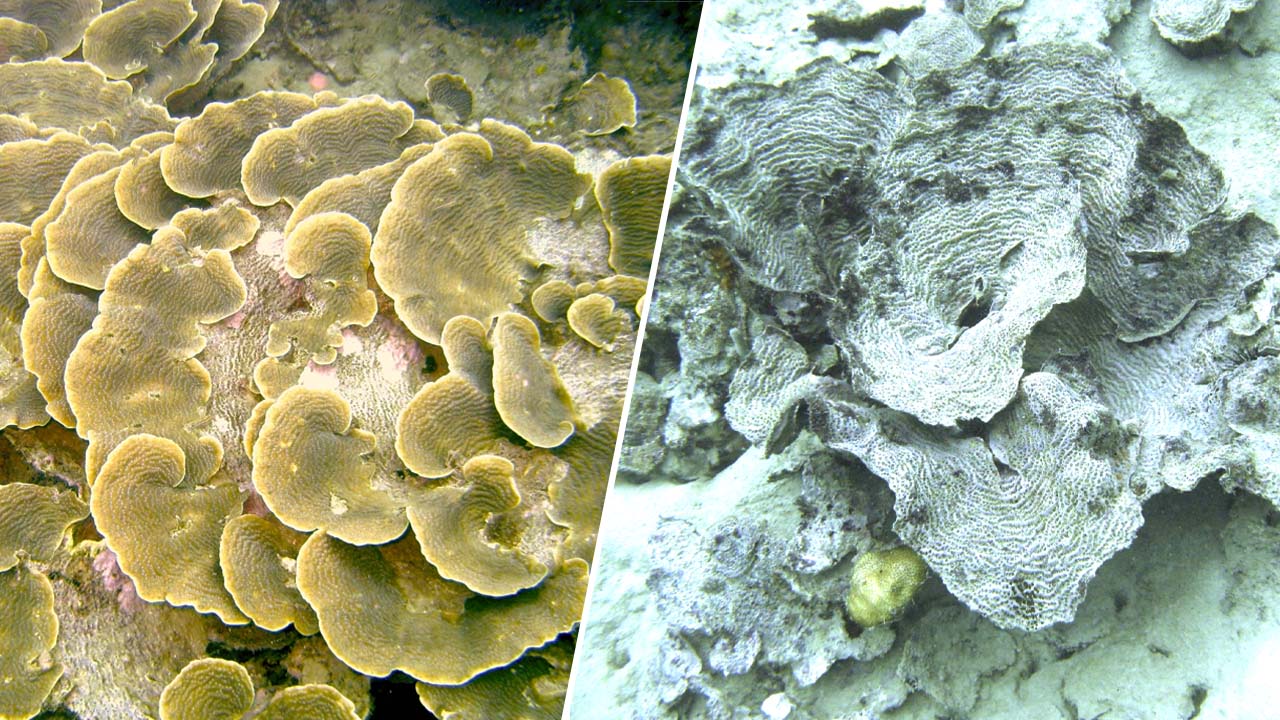 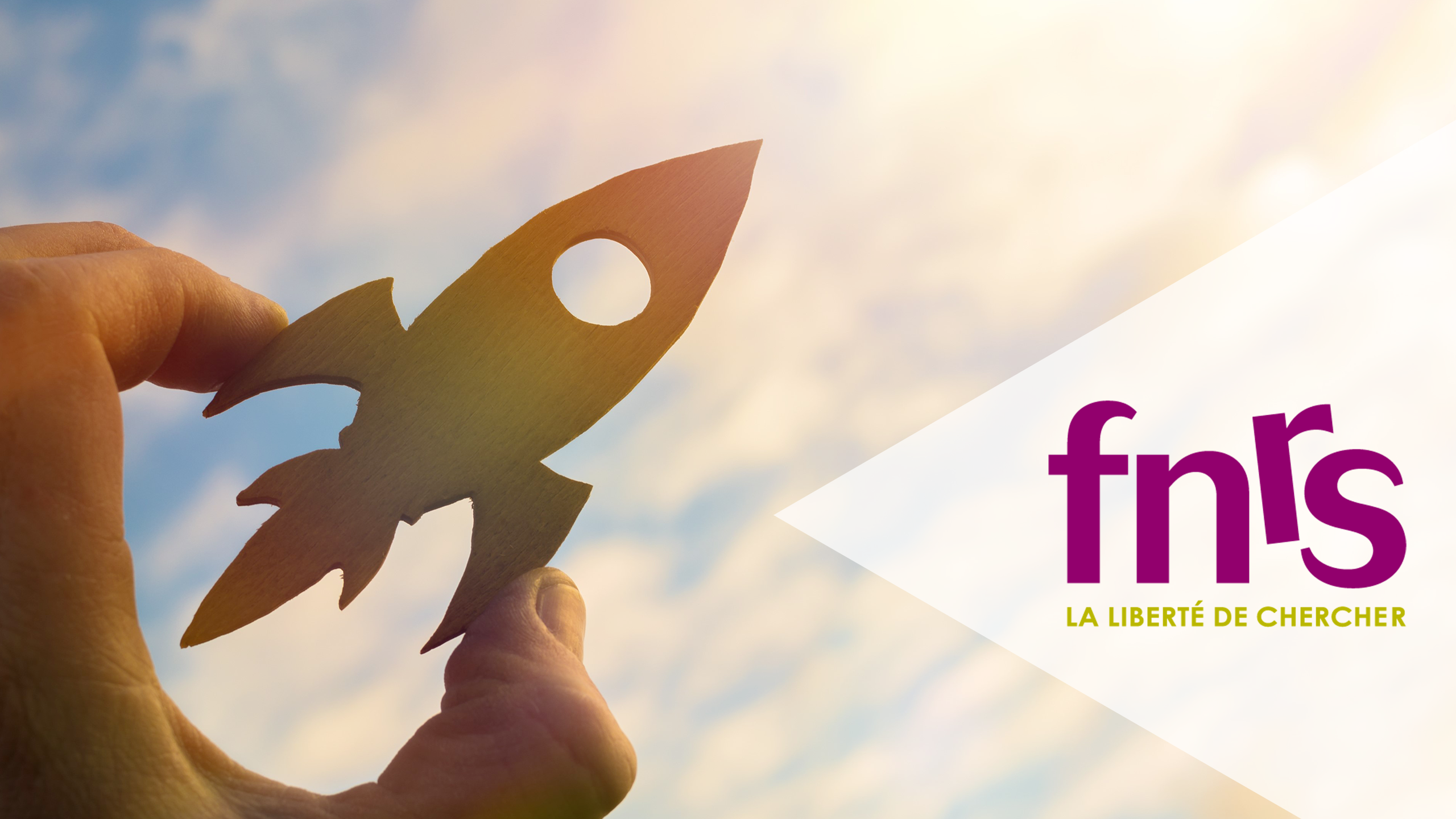